"Unemploid encaptures not doing what everyone else does...but trying to set your own path." 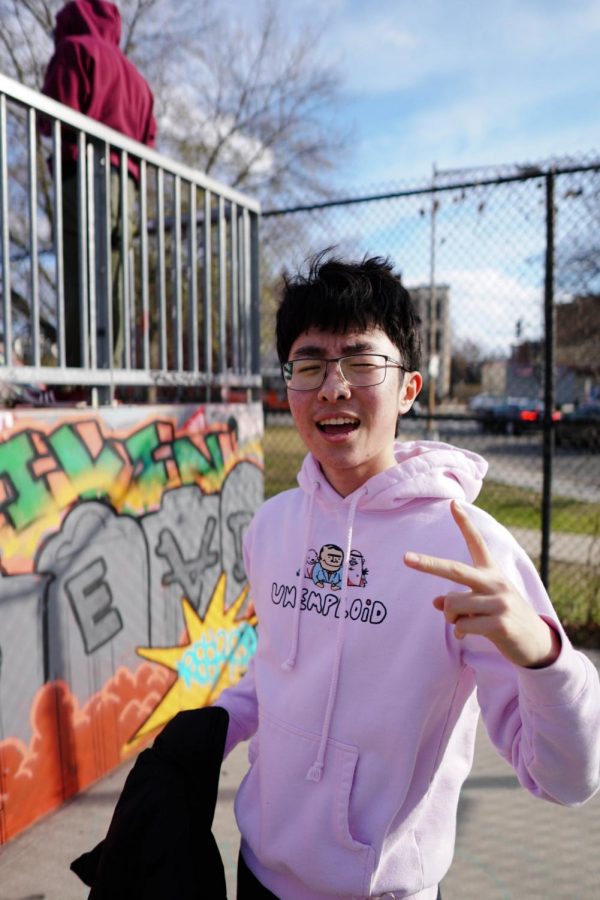 Bryan Zhang, the senior founder of the Northwest-renowned brand, Unemploid.

From buying and selling clothing online for four years, to becoming a Northwest-renowned entrepreneur by eighteen- Bryan Zhang is not your average high school senior. Unemploid, Zhang’s most recent project, has taken Northwest by storm as students are often seen flaunting his extravagant handmade designs on hoodies and t-shirts.

Zhang’s career started off with his first project titled Yang, which he deemed successful up until September 2019. That’s when he decided to halt efforts on it and instead rebrand as Unemploid. Zhang explains the reasoning behind this, “With Yang, I closed it down because I was losing quite a bit of money. And so I decided to just rebrand it and restructure it into something new.” Now, he is fully focused on expanding Unemploid. He’s set multiple goals for the brand this year, “I set some financial goals. So with that, I really want Unemploid to be profitable.”

“Another is exposure. I really want to be able to build a social media influence over not just Northwest, but all of Montgomery County. Hopefully in other states, as well. And another goal would be to have my shirts be sold in stores if that’s possible- to be, like, in a boutique in DC or something like that.” Zhang also emphasizes his desire to do more collaborations with “some cool people.”

Zhang’s interest in fashion peaked when he sold vintage shoes and clothing on the popular bidding website, Ebay. “I sold stuff for over four years. Surprisingly, I made over $30,000 just selling stuff on Ebay. And then that’s what really got me interested in fashion and so from there I started Yang with my friend Syd.” Zhang considers Syd Ulvick to be the one who really encouraged him to make shirts. “And he’s a really great artist, I’m not that great at drawing, to be honest. I’m learning, but I’m not as great as he is.”

With great inspiration comes great work, and like many other students at school, Zhang finds his inspiration from those around him. During his freshman year, he saw something on the morning announcements that really struck him. “There’s a lot of talented people at Northwest. Empire 242, the 9/26 guy, Aboe, he’s a really fresh dude. I saw him on the announcements in the ninth grade, and just seeing him rap… it showed me that these people are really talented, you know?” Because of his own talents in business, Zhang wanted to do something completely unrestrained as well.

Zhang also finds a lot of his inspiration on social media sites, “Just watching a lot of YouTube videos; I guess if you find a cool guy on YouTube- on social media-  that can really motivate you… that’s a good thing too.”

It is nearly impossible to run a successful brand without an immense amount of support. Thankfully for Zhang, seeking support from students and staff hasn’t been much of a struggle at all. He explains, “I can’t really narrow it down to one person, but everyone at Northwest has been really supportive. There’s some clubs, like the Northwest Physics Club- shoutout to Rashika and Kamila, and Leilani and everyone there. They allowed me to do some sort of collaboration with them, so I made shirts for them.”

The support doesn’t just pertain to Northwest, though. The senior was recently able to create merchandise for a music venue in DC. “They were hosting a music show with five or six artists in college or high school. It’s called NXT Fest, and they allowed me to make merch for them, so that was pretty cool.”

It’s expected that running a business such as Unemploid comes with its highs and lows. Zhang reveals that there have been times when he felt awfully discouraged while pursuing his passion. He explains that starting out gave him a rough time, because according to him, no one cared about anything he made. “The first, like, month or so is really when you’re trying to spread awareness to try to make your brand into an actual brand. So that’s a really tough time, but you have to push through it.”

Zhang also expresses the support he and Syd provided each other during these difficult times, “For me, I just had Syd to work together with, so you know, he and I… we kinda just pushed each other. Made sure that even if no one bought it, we would still keep trying to tell everybody about it; Keep wearing our shirts every single day.”

The senior admits to an unfortunate decision he made last summer which resulted in the loss of money, and eventually led to the closure of Yang. “I decided to make fifty shirts, which really wasn’t a good idea, ‘cause I spent too much money and no one really bought it. And so that’s when I realized that I didn’t know if I wanted to keep doing Yang. Since I had too much stuff, and it was just a real pain trying to get people to buy it, I just decided, okay, I wanna take a break from this and come back, revisit it in maybe like a month or so, and try to maybe re-brand it. And now it’s Unemploid.”

Zhang describes the first time he felt proud of himself as when he made his first t-shirt sale. “It was a guy named Jonah, he goes to Montgomery College now, but he was the first person who ever bought a Yang t-shirt. And that was, at the moment, okay, someone bought it, other people might buy it. And that’s when I really thought okay, this could work,” he says.

Another moment of proudness for Zhang was when he had the opportunity to sell his shirts in a Bethesda State Shop. Zhang describes that experience as a “dream come true.” He also considers setting up the Yang Industries website as another successful time.“Now, hopefully, I’ll have another successful moment when I launch my Unemploid kickstarter,” he muses.

The young entrepreneur has remained humble about his work all the way through, despite Unemploid being quite popular among students. “I’m gonna be honest- I don’t think that this is really that cool. Even though no one does it at Northwest, probably everyone has some sort of t-shirt thing at every school. So it’s not really that special. It would be special if I was able to find some success in it, and try to just reach out to I guess greater than Northwest, if it can become some sort of global brand.”

He adds, “But I receive a lot of support, a lot of people at Northwest think it’s pretty cool and I really appreciate that.”

Bryan Zhang is the epitome of someone with a burning passion for what he loves to do. He describes what passion is to him acutely; Something that comes and goes. “There are times when I feel like I have so much energy that I wanna get [something] accomplished. And there’s other times where I just don’t feel like doing anything,” he explains. “Being passionate about something is… it really means that you keep doing it no matter what, I guess.”

Zhang opens up about his own struggles with being passionate, as well. “I would say that I struggled with being passionate about my brand. There’s sometimes when I believe that I don’t think it’s going to succeed. I feel like, okay, I got this, and let’s do it.” Ultimately, Zhang seems to have mastered the art of pushing through when times get tough.

He also discusses how his Chinese upbringing has influenced his work. “I’m a Chinese guy, wǒ shì zhōngguó rén. I guess with Yang, a lot of our designs were inspired by oriental vibes.” He recalls a hoodie designed for Yang for Chinese New Year celebrations, and explains how his own parents have helped him learn important business values.“They’ve kind of helped me with their Chinese cultures and given me some business tips on how to run something,” he says.

Anyone familiar with fashion design and clothing production knows that the process of creating clothing isn’t just a one-day thing. The translation of Zhang’s vision to his pieces is quite the process. And for him, it all starts with a single pink notebook. “I just put my ideas in this notebook, and then if I have some sort of design idea, I’m not really that artistic, but I’ll try to sketch something out really quickly,” he begins. “And then, there’s a lot of talented artists here at Northwest, and so I would probably ask one of them to help me out. I’ll pay them like ten, twenty dollars to help me make the design. And then from there, I’ll go to my friend’s house and we’ll make t-shirts there.”

The job is timely and often difficult for many reasons, but Zhang’s hard work pays off. As for this year, the ambitious student is clear in what he wants everyone to expect from him- nothing. He spells it out, “I just want to be kind of spontaneous, you know? I don’t want this to be… I guess… I don’t want it to be really boring or anything. I want all the designs to be fun, flamboyant, colorful. I guess that’s what I really want.”

“If they don’t like it, it’s fine. But if they do like it, I really want them to be able to enjoy the products that I make,” he says.

Zhang just wants people to resonate with what he makes and with what Unemploid truly stands for. “With the name Unemploid, I’m trying to really focus on how you could find things that you really like to do in life.” He returns back to the idea of passion, “…Finding passion in things, and to really focus on the stuff you’re really passionate about. For me, I really like making t-shirts. I like doing these entrepreneurial things.”

“I think the name Unemploid encaptures not doing what everyone else does, not trying to go out and search for, like, a nine-to-five job, but trying to set your own path. So, that’s what I really want people to get from this brand.”

Bryan Zhang is an eighteen-year-old Northwest-renowned entrepreneur, and will never be your average high school senior. Zhang has worked his hardest for the past few years to get to where he is today, and Northwest High School will never not be cheering him on. Shop Unemploid here, and check out the official Instagram account here.