"I don't think it's the only approach. I think it's what we're trying right now so we can learn from it." 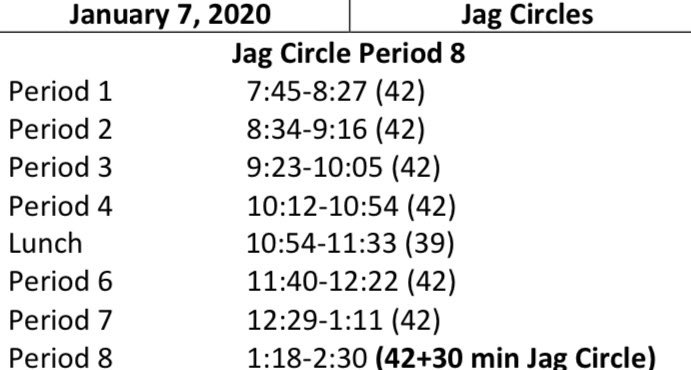 Jag Circles are meant to help students and teachers build relationships and feel more comfortable talking to each other.

Northwest High School places a high value on the students’ mental health. So high, that they’ve incorporated bi-weekly class activities that promote student well-being and peer collaboration. They are called Jag Circles.  At Northwest, they are meant to be a way for students to get to know their peers and feel more comfortable in their classes.

On one hand, Jag Circles are a fun way for students to interact with one another and have discussions they wouldn’t typically have .  On the other hand, they require a lot of class time. The extra time we take out of the school day for Jag Circles could be used for more scholarly things, like reteach and retake sessions. While focusing on students’ mental health is very important, a lot of students believe that Northwest could do better.

“I think Jag Circles are pretty useless. I think if they really want to help with mental health, they’ll alter schedules, and give us longer lunches,” sophomore Anjali Marfatia explains. When asked how Northwest can make improvements, Marfatia was very blunt in her response. “Get rid of them,” she says.

While the way Jag Circles are done now isn’t popular, students do appreciate the fact that administration is trying.  “I believe they are taking the right approach because the first step is always to acknowledge these problems that are very prevalent in our school and among students in general,” says senior Taylor Cross. When it comes to making Jag Circles better,

Cross has a few ideas.”Maybe like, have people play more game-based things. Or just have something that makes every kid interested…Not just like ‘Say Your Favorite Color’ because at the end of the day, it doesn’t really go with the cause…” The Northwest senior thinks some of them are fun, but the school’s staff could use more preparation time before trying it out on the students.  “Teachers don’t know what they’re reading, people don’t know what they’re doing, and since it’s not fun, people just won’t put in as much effort into it so it’s just really dry and boring for everyone.”

Many students have shared that peer participation during Jag Circles is almost nonexistent, which refutes the whole purpose of the class activities. Even teachers and other staff members are well aware of the fact that Jag Circles need major improvement.

“As far as Jag Circles go, I think the intention or the concept of creating more time for relationships is great,” says Northwest technology and journalism teacher Mrs. Lang. “I just think it’s really hard to do it in a natural way. The execution feels forced and doesn’t feel organic. That’s what I think the problem is… but I don’t know how to make people form relationships.”

“I don’t think it’s the only approach. I think it’s what we’re trying right now so we can learn from it,” says Jag Circle Committee member Ms. Ground.”I think that students’ mental health is one of the most important components of success for students, especially at this age, because kids are pretty delicate and they’re still forming opinions and they’re still trying to figure out who they are.”

She refers to an important program that was run over the summer. “It was helpful because students felt connected to staff, and staff felt connected to students, and research shows that when students feel connected to their teachers, they’re more willing to take risks, develop a trusting relationship, and in turn, have a better chance at becoming successful.”

As a member of the Jag Circle Committee, it is expected that Ms. Ground has suggestions for future advances to Jag Circles. “…being on the committee is kind of a great place for this. The first is I think we have to do a better job of communicating the reason why. Staff, I think we needed to do a little bit more scaffolding. We had this incredible experience over the summer, but we had multiple days with our students and so we needed to do a better job of modeling.”

Ms. Ground reveals that the committee is trying to gather more feedback and make improvements, and is planning to do so in the very near future. “I think that other ways that we could incorporate more would be choice, which we’re trying to work on. And expanding the ideas for Jag Circles and getting more feedback, which is very soon.” Ms. Ground promised a survey asking for student feedback in the next two weeks.

At the end of the day, almost everyone has mixed opinions on Jag Circles. Whether that be students or staff, many highly dislike them but support their purpose. Some think they’re great. A lot just really do not care. Ultimately, Jag Circles are quite the hot topic at Northwest, sparking heated conversation almost every time they are brought up.

Almost all students can think of at least one thing they love and hate about Jag Circles, and soon enough Northwest will be ready to hear their voices.