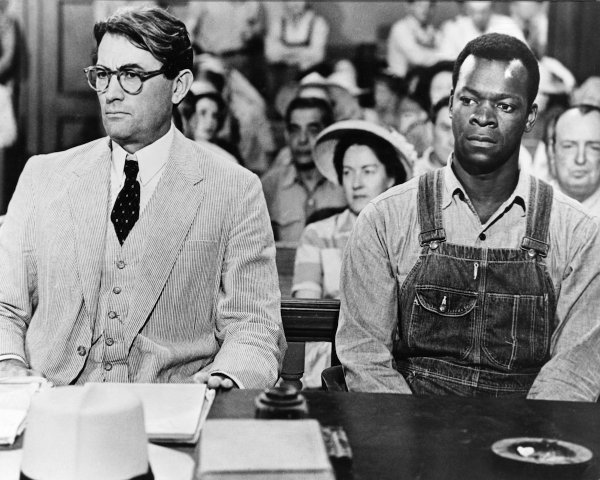 Actors Gregory Peck as Atticus Finch and Brock Peters as Tom Robinson in the film 'To Kill a Mockingbird', 1962. (Photo by Silver Screen Collection/Getty Images)

Why does a student turn to a classic film adaptation instead of reading the novel? Visual learner?  Heavy workload? Laziness? Still, we have all been there. We “sparknote” a chapter (or more) because we were too busy binge-watching Stranger Things. And, we all have teachers that warn us, “don’t think you can just watch the film; it’s different than the novel.” Still, some adaptations are quite faithful to their original. To Kill a Mockingbird, a classic 9th-grade reading assignment, narrated by Scout Finch, is one film that matches the novel’s quality.

Set in Maycomb, Alabama, in the 1930s, the major conflict revolves around the trial of Tom Robinson, a black man who has been accused of raping Mayella Ewell, a white woman. While both the novel and the film address racism and prejudice, the novel addresses other issues as well, such as gender roles, and it also contains more symbolism and character development compared to the film.

The first and most obvious difference between the novel and the film is the narration. In the novel, Harper Lee uses a first-person literary point of view, so Scout’s voice was constantly in the ear of the reader, and the reader could develop a deep connection with her. Scout tells the events of the book as a retrospective narrator looking back on her childhood. The reader has a chance to understand her emotions and her thoughts through her conversational style and can gain sympathy and empathy for her. However, the film, by its very nature, is a third-person narrative. Scout rarely narrates directly. Moreover, the viewers are witnessing the events as they happen, so they only see the childlike perspective portrayed in the story and never develop a deep connection with her as they would in the novel. This is significant because the film focuses more on Atticus and his struggles against the town as he defends Tom Robinson. The film presents him as the main character and shows the adult perspective of the story more than the children’s point of view of the events in the novel.

Although both (the novel and the film) contain the mad dog scene, the novel details it over three chapters and includes character development and symbolism. In contrast, the scene in the film is more insignificant. In the novel, when Calpurnia notices the mad dog, she runs to all the houses, including Radley’s, to warn them. This is major character development for Calpurnia because it shows that she will do what is right and that she does not care about labels. Despite all the terrible rumors that the neighborhood invents for the Radley house, Calpurnia treats him the same as she would any other person and warns him. Additionally, there is symbolism in this scene when Atticus shoots the dog. The mad dog is a symbol in the book that represents “Maycomb’s usual disease.” This is a phrase that Atticus coins in chapter nine, which criticizes Maycomb’s people and their tendency of racism. The dog is a symbol that represents racism, and Atticus is the only one who can fight against it, while the rest of the people hide from it. As well, Atticus’s marksmanship amazes Scout and Jem, who had never heard of One-Shot Finch.

Additionally, considering that a film generally runs 90 to 100 minutes, fewer characters, and therefore fewer conflicts can be addressed. For example, in the film, Aunt Alexandria never appears onscreen, so the issue of gender roles and the constant harping by the other Finch women that Scout isn’t ladylike but more like a tomboy is ignored. Similarly, the film never showed any of the conversations between Scout and her teacher, Ms. Caroline. In the novel, one of the minor conflicts deals with empathy. When Scout tried to explain to her new teacher the ways of Maycomb, Ms. Caroline spanked her and sent her to a corner. When Scout told Atticus all of this, he said that she needed to see things from other’s perspectives as well and that she lacked empathy.

Furthermore, Scout, and her brother, Jem, do not have any relationship or contact with Mrs. Dubose like they do in the book. In the novel, Mrs. Dubose has a big impact on the kids, especially Jem. In the novel, Scout characterizes Mrs. Dubose as a terrible person who constantly throws fits and insults everyone she meets. When, one day, she insults Atticus; Jem decides to seek revenge by cutting down all the Camellias she has in her garden. However, then, he pays the consequences for his action as Atticus makes him read every day to her after school for the next month. Only after she dies does Jem learn that she courageously overcame her morphine addiction. This event teaches Jem to be more empathetic and to form judgments only after he is aware of the entire context. It also teaches Jem and Scout, “what real courage is, instead of getting the idea that courage is a man with a gun in his hand.” (H. Lee, 61). Atticus wants them to learn this lesson so they could understand why he was defending Tom Robinson; Atticus knew Robinson would be declared guilty, however, he still stood up for what was right.

In a way, the novel version surpasses the film in addressing the issues in the Jim Crow-Great Depression era. However, the film is also great at depicting Scout’s life and the issue of racism considering the time constraint. In the end, there is a reason teachers do a “just press play lesson” with the film of To Kill a Mockingbird. The secret? They love it, too.